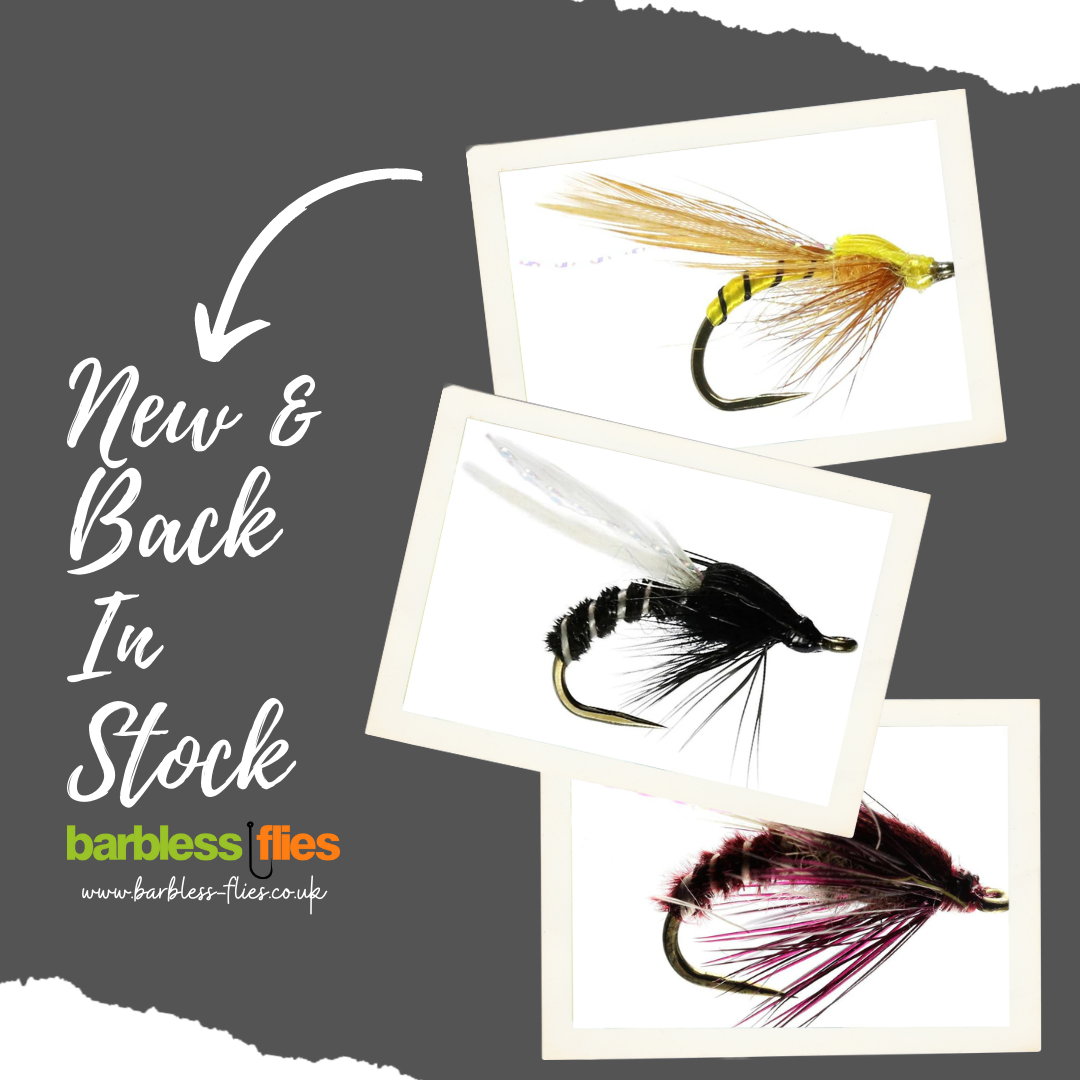 We're dipping our toes into stillwaters today ... Over the past few weeks we have mainly concentrated on Mayflies, but this week we've had loads of new Stillwater patterns arrive. We have heavily invested in increasing our range of Stillwater flies, over the last 12 months we have added over 400 different patterns, and now have virtually all of them available on the website

It looks like we're in for some nice weather over the next couple of weeks, so I thought I would include some tips in this email on fishing stillwaters in warmer weather:

As the weather starts to warm the water, buzzer patterns will come more into the fore as far as the stillwater angler is concerned - especially adult buzzer imitations: 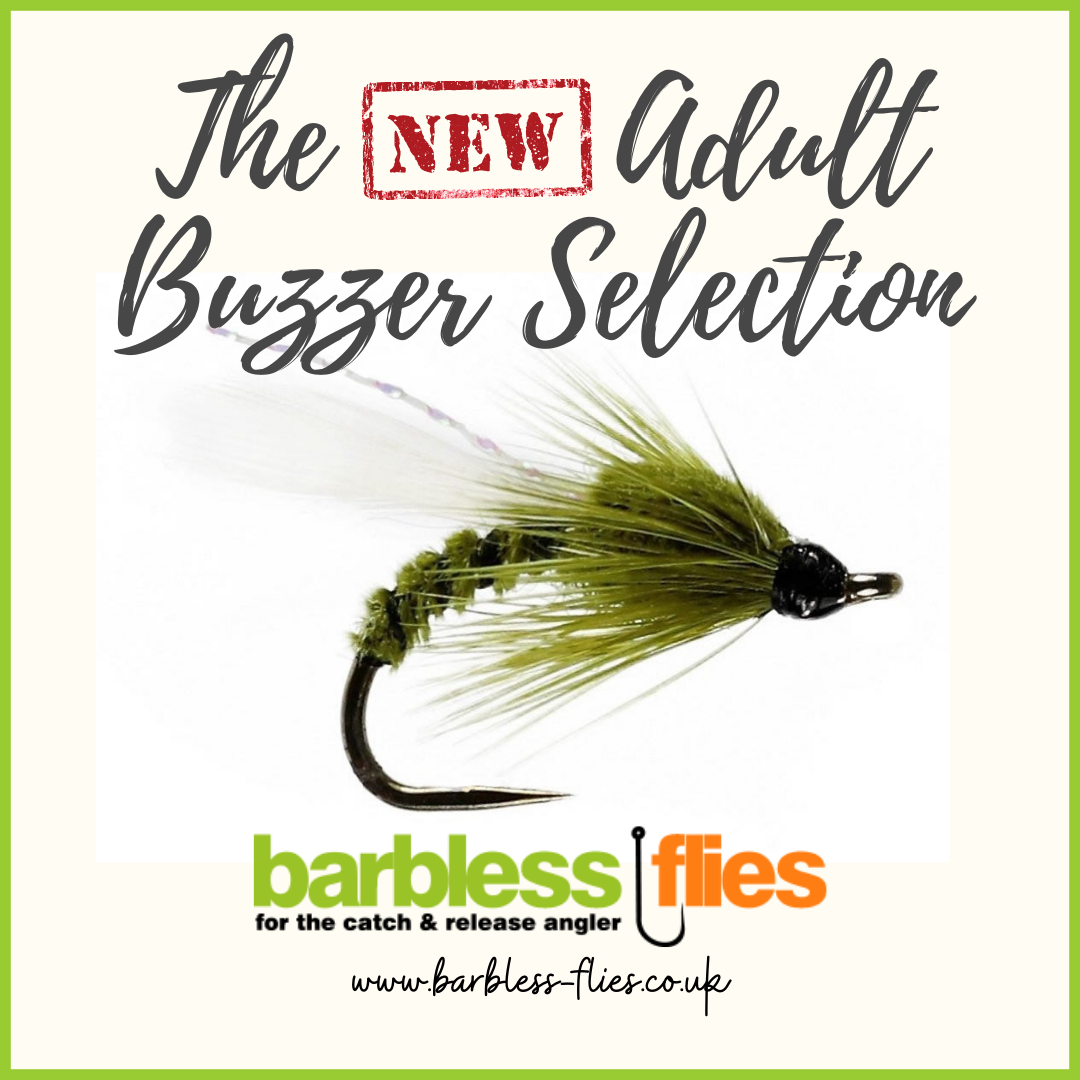 We've updated our popular Adult Buzzer Selection to include some new imitative patterns for the 'warm weather angler' - these are the patterns which will be more successful as the water starts to warm up: 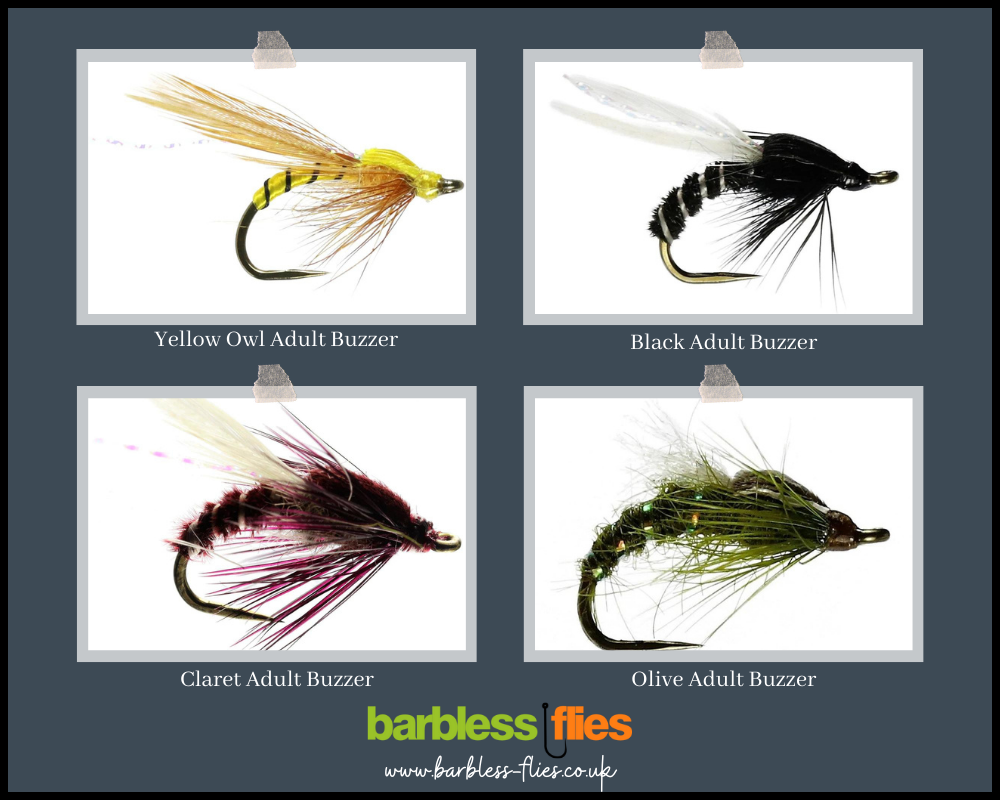 Buzzer fishing on stillwaters is generally dependent upon the wind:

Go on, you know you want to!

Some Of Our More

The booby patterns get a lot of criticism, but these ones are worth their weight in gold. With a slim body with blue holographic wire around, on a size 14 hook, it is best fished half in and half out of the water using the blue flashes to attract fish - especially on a bright day. 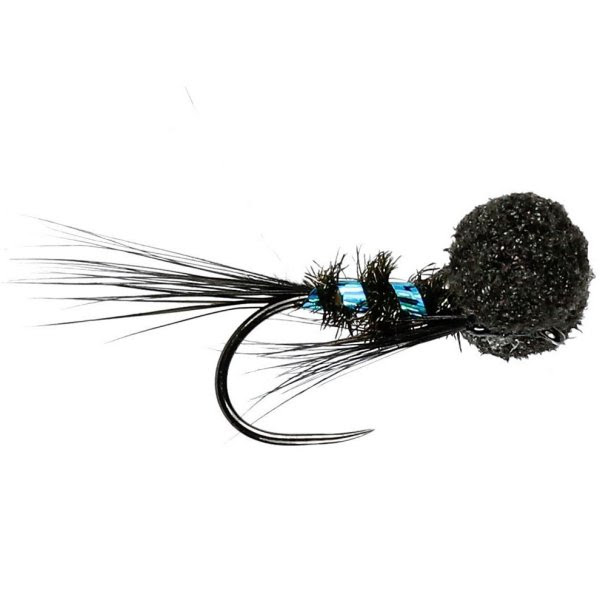 You are guaranteed to catch the fishes attention with this Orange FAB. No one really knows why these work, some posit the idea that this imitates a bloom of daphnea, which the fish love to eat - who know's - but we do know they work extremely well. 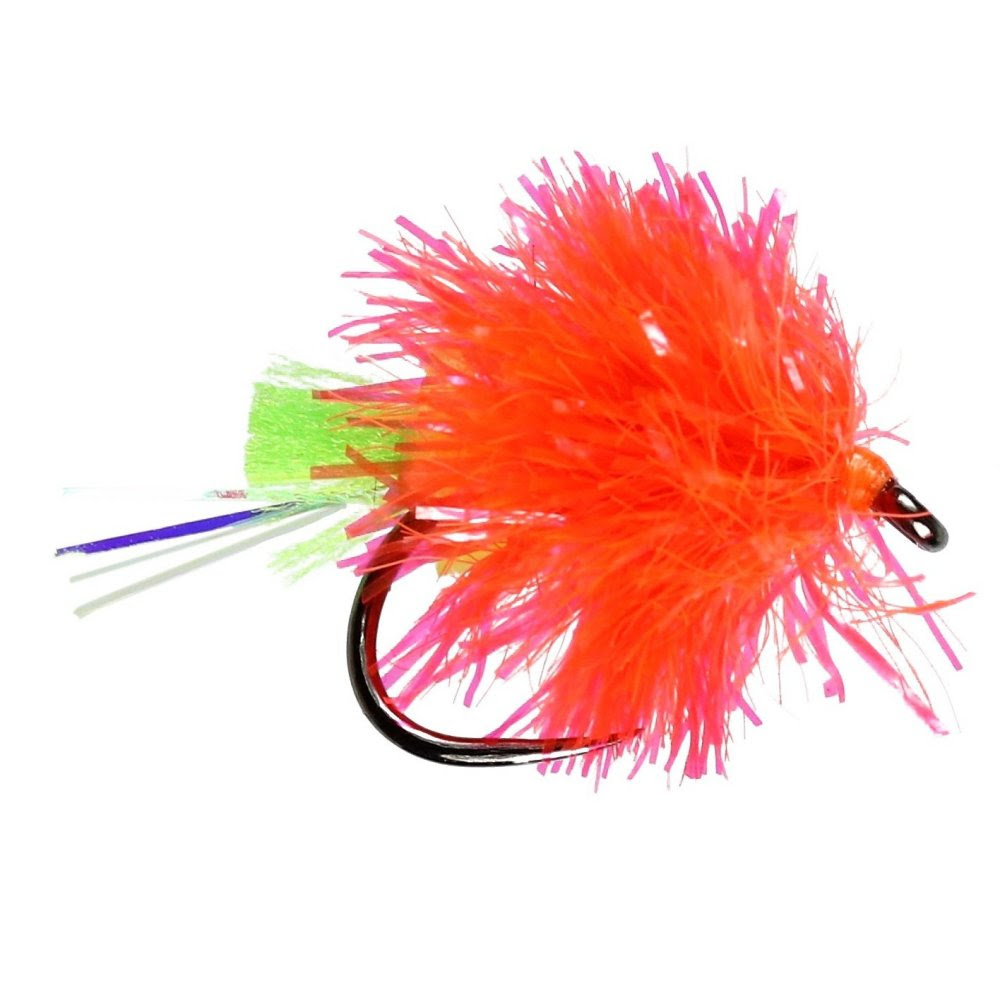 Have You Tried The Washing Line? 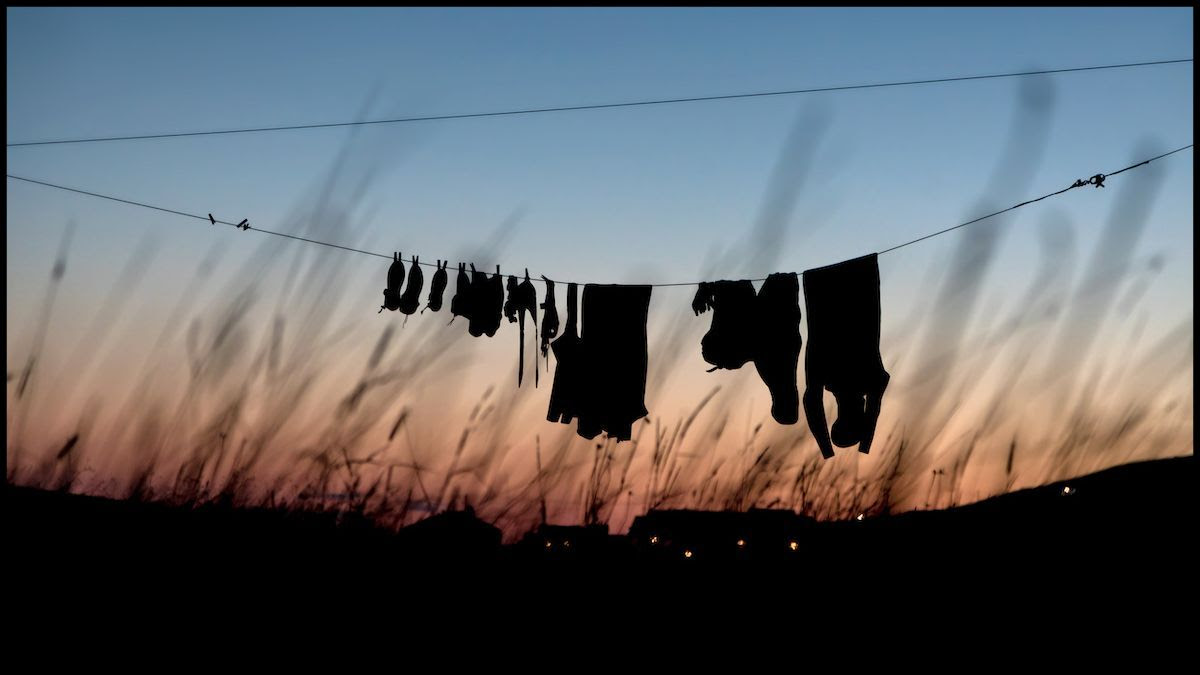 What's the 'Washing Line' method I hear you ask?

The washing line method is a technique designed to let you fish an emerger/buoyant fly on the point with a team of buzzers/nymphs suspended just below the surface of the water, using a floating fly line - it hangs just as a washing line would - suspended by the floating fly line at one end and the buoyant point fly at the other. Normally when fishing with buzzers or nymphs, they would descent down through the water column slowly (which is a good way of searching to find the depth the fish are feeding at). However, the 'Washing Line' method allows you to keep all of your flies just below the surface where the trout are most likely to feed.

Using this method requires you to use a much longer leader (in excess of 10'). As a general rule, use a leader of around 12' to 14' (this also makes it much easier to net the fish once you have caught it, as you will not end up with any of your flies hanging in the top ring of your rod). A good initial setup when starting out is to space your flies on short droppers (about 12" long) each one 3 feet apart - this makes it easier to cast. If you're having problems casting it, just use a buoyant point fly (like our Stillwater Dinkhamer) and two droppers.

I like the sound of that, when should I use it?

Always use this method when the fish are high in the water and sipping buzzers or taking the insects as they emerge. Check out the rise form of the fish, look for a 'head and tail' rise - think of the way a dolphin breaks the water surface, first you see the head, then the dorsal fin, followed by the tail. This will be the first indication they are taking buzzers.

Here's a handy Stillwater hatch chart for you if you can get to a local stillwater this coming month: 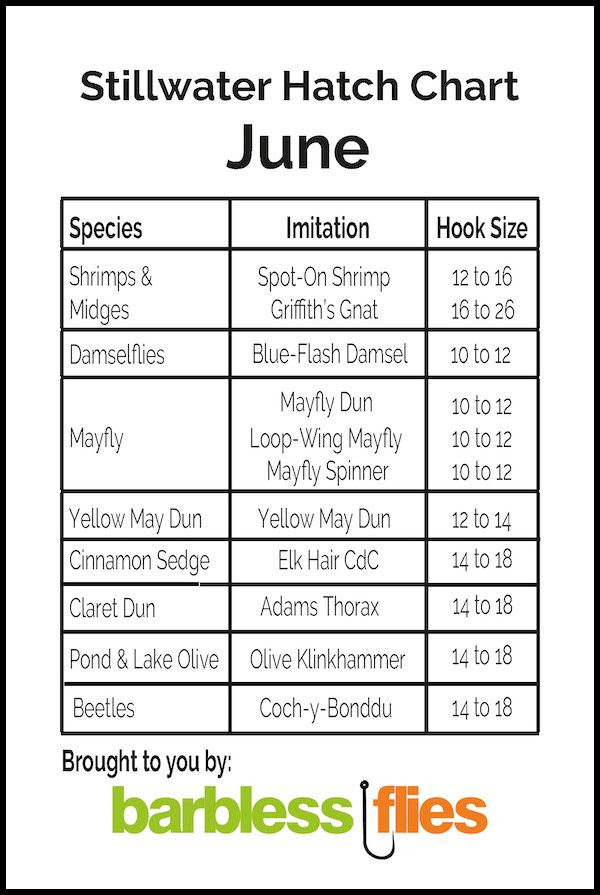 f you've a thing for stillwater fishing - be it reservoirs, lakes or small tarns - stay tuned to your emails next week as we've a pretty big product announcement to bring you, but more of that next week ... In the meantime ...

Get out there and have fun!